I intend to make battery pack for mu off grid solar system.
I harvest 700-800 batterys and testing is in progress. Most of them are 2000-2300 mAh. I use Lito kala tester and charger.
My batter need to be 12 or 24V. What is better for build, and what serial I should do? I see somewhere that for 24V I need 7s.

What I have is that I make good and safe battery pack as my loog cabin is from wood. I dont want fire there.

I think you need to review the FAQ, located on the main page. It would answer half of what you asked here and then answer some you haven't asked yet.
Proceed with caution. Knowledge is Power! Literally!
Knowledge is Power; Absolute Knowledge is Absolutely Shocking!
Sub-Certified 18650 Cell Reclamation Technician

I been using 3s 18650 packs for years. It runs all my 12 volt devices and also inverters. It easily charges with any controller. 4s 18650 pack would be harder to charge with solar, you need a controller that you can set the bulk setting to close to 17 volts to fully charge, most controllers might max out at 16 volts.

With a 4s or 7s you would need buck converters to reduce the voltage, with a 3s you might only need a boost converter to run a 12 volt fridge.

I like 3s because of the lower voltage gives me higher amp charging with my 240 watt panel. I seen up to 15 amps of charging power. With 4s lifepo4 or lead acid, my panel maxes out at about 12 amps.

As far as bms for your system, I recommend the chargery bms8t, it can handle up to an 8s system, I been using it for almost 2 years and its been rock solid. It uses a contactor/relay to disconnect the panel from the controller if the battery gets full. It also has audio/visual alarms and temp sensors that will pull the relay if temp gets to high. I use it with lifepo4 but I would definitely use it with 18650. You can program the max voltage for the cells to whatever you want. Other people use the baltrium bms but thats a 500 dollar bms, the chargery is in the 100 dollar range.

I also have an overvoltage protection relay(6 dollars) that will disconnect the panel if the bms fails. Always have a backup, or many backups, to prevent overcharging the batteries. In the picture you see my backup, in the actual system there are 2 of the 30a automotive relays, one is for the chargery bms.

With the chargery and the overvoltage relay I can leave the system unattended and not worry it will get overcharged. You can't always be there while charging so you need to make sure the system is as close to as 100 percent reliable as possible.

I never trusted the cheaper mosfet bms and wouldn't leave them unattended. I had one overcharge a battery and decided to find another bms that was safer to use with solar. 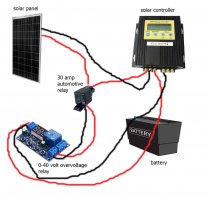 
Using a buck converter from 14-16 to 12V would be sufficient, and much safer. You don't want to see an overcharged lithium cell go rogue. Not a pretty site.
Proceed with caution. Knowledge is Power! Literally!
Knowledge is Power; Absolute Knowledge is Absolutely Shocking!
Sub-Certified 18650 Cell Reclamation Technician

Oh my... shouldn't have read this thread.................... right today I thought about using 18650 for my new solar system; until yesterday I was ready to buy 4x 140Ah AGM Deep Cycle batteries, to make a 48V battery which goes with the inverter. For some strange coincidence I didn't buy them yesterday...

And it's quite limiting, at least for me!, to have a 48V battery constraint because it makes it almost impossible to expand the battery pack unless I spend a load of money. To expand a 4x 140Ah 12V AGM battery system means buying 4 new batteries... a load of money.

Now, reading this thread thread I'm reconsidering buying Lithium cells because it's more or less in the same money range of AGM batteries. I'm in no hurry to get everything up&running but right behind me I have the solar panels and the inverter looking at me saying "mount us! mount us!" LOL

For me switching from AGM to lithium means:
- Not being expelled from the forum ;
- Being free to expand capacity;
- Watching (again!) hours of videos for mounting powerwalls and reading (again! AHH!) tons of documents;
- Having to make an exact list of what to buy (wires, busbars, holders, BMSs, ...), this takes me so long... days;
- Spend probably weeks (I'm so slow when I do things well ehm) preparing everything and mounting it;
- Speaking with my wife at least once and have saying her saying to me "but are you sure they're not dangerous" a million times LOL;
- Being supa happy of making a super awesome power bank... yeah!

And a most difficult choice is:
- keeping batteries in the house vs outside with a temperature control system (knowing myself I'd actually mount two to be on the safe side); in summer outside it reaches even 42-45°C (107-113°F); the inverter most probably will be outside because of the fan noise, I must try switching it on to see if it's noisy... If I really do find a way to keep them inside that would mean being super-paranoid of the safety aspects.

You will salvage cells or you will bay new one. I have 600 cells, a lot of them are HOT, during charge they become hot, I dont bealive that this is good. I use 1A.

I'll do 50/50, maybe I can harvest quite a few 100s of cells.
I have a bag full of notebook batteries and until now more than half of the cells are good, 80/90% of charge and they maintain it in time. I discard heaters. Yes, I set chargers on 1A, too. Yesterday I ordered a second charger, another 4 slot Liitokala 500, maybe I'll need a third one. For 20$ it's a good choice for me. I'll need an IR tester, that will be the next buy.

Last thing: My main goal, a reason to use lithium, is to have an expandable battery pack. I do all of this this on low budget, that's my idea of recycling, but with all safety measures kept in count. I found out that these big inverters (well, big for me!) use themselves an important amount of current (mine should be <55W in inverter mode with no-load), that's why guidelines suggest a battery pack of at least 200Ah @48V; to keep all the numbers easier to understand I'll keep them in KWh because watts are the same if you use them at 12V, 48V or 56V and I calculate using 18650 at 4V.

So, suggested 200Ah flooded AGM battery @48V has a capacity of 9600Wh (48V*200Ah). My first idea, could change!, is to make lithium battery packs of about 3000Wh each and start making the first two; and next year add another one or maybe two, something like this:

That's all the theory. Now I must see what our forumes say on the practical side, if 4 packs in parallel are good, if there's any design drawbacks in making 14S20P and stuff like that.

italianuser said:
That's all the theory. Now I must see what our forumes say on the practical side, if 4 packs in parallel are good, if there's any design drawbacks in making 14S20P and stuff like that.
Click to expand...

4 batteries - for expansion - is perfectly OK.

Pack/battery size design a consequence of several factors. Its not about right or wrong but rather what works for you / your situation. Some key issues:
1) Overall goal. In your case you give 12kwh so 4 x 14s20p is perfectly reasonable. In my case I wanted 100kwh so the shear quantity of smaller packs becomes less attractive for larger goals.
2) BMS design. You may be comfortable with 'no data collection' / cheaper BMSs and you'll need 1 per battery. Typically these don't do well with 200p packs - so there's a limit. In my case, I wanted extensive data collection / monitoring so Batrium became the choice... which in turn enabled up to 500ah packs which in turn made sense to me for the larger goal.
3) Physical connections. On larger packs you have more buss-bar / cell hookup. On smaller packs you have more parallel wiring to do, more BMS sense leads to do, but less other stuff. Its just all a trade-off - not good or bad so much

In any case, based on your goals, you're plans seem perfectly reasonable to me - and love to see some pics
Last edited: Apr 29, 2021
F

52v is good easier to remember than 51.8 everytime I need to do a calc I end up using my computers calculator especially since i am dealing with LiFePO4 and 3.7v lithium chemistries. I wonder sometimes if that is a mistake, then that passes
Later floyd

I still have 24 batteries to test, so test should be done in few days. Now, plan is to charge all cell's and to check does any of them have big selfdischarge. I will leave them for 14 days and measure voltage again.
Regarding capacity, what is lower capacticy which I need to use? They come from 1300mAh up to 2600mah. also some 500-1300mAh but no so much.
What is lowest capacty for use in power bank?
I was also thing to do not measure internal resistance for cell as I will pull from my power pack MAX 10A. This is 10A devided to number of cell which I have. I think I will have 400 cells. Internal resistance is is just for power which cell can give. I will never suck more than 30mA from cell's.