As per some recent threads I'm wanting to control charge rate using an external charger over can.

This setup is nicely documented here, so I'm assuming its proven as functional by Batrium, but it's only partially functional in my test setup.

I've a number of the Elteks, they are all brand new, and I've no issues telling them what to do over canbus via a dongle and savvycan - so I'm sure the issues aren't external to the WM4.

Chrge target limited settings do affect a reduction in current, but don't relate to the charge targets.

Where are the charge target comms fields getting their data from ? (I have the Eltek on the battery side of the shunt,so if the field data is coming from the shunt then that's expected).

Scaling: I've read the single line of documentation relating to this, and it makes sense -but not when current scaling is required to be set to 10 for the actual measured current to be set correctly. (the how to states 100)

Tomorrow I'll find figure out what what the WM is actually telling the Eltek, I know what it should be telling it.

A general question, is anyone using the WM4 canbus reliably ?

I have 3 Eltek chargers running in my system, have them hooked up on the inverter side of the shunt... ( think this is the logical side.)
But i am using a WM1, so not sure about the WM2 but assume it is the same.

i found the WM1 is sending out only a broadcoasting command with the current and voltage settings to the Elteks, andtakes feedback of only one charger to display on the batrium telemetry remote fields... d'ont think there is more done with those values....

It is working just fine... onlynot very much elegant.

I have done some checking of the comms between the WM(1) and the Elteks, but did not yet finishedthe work (as usual )

I would like to have a arduino mega inbetween the WM and the chargers to have them reporting back to the WM and have them coming online one by one, becourse it they get the command from the WM they switch on all at once and my generator gets overloaded...

So i am very interested what you are doing... 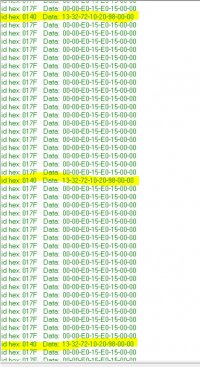 Shunt side is the logical side, I'll move it today, I did assume the telemetry from the Eltek would be used to populate the live fields, but seeing it blank made me doubt my reasoning.

Voltage and current are the only thing the WM needs to be broadcasting, but there's a raft of data available coming from the Eltek, including temps and actual voltages - I've seen a difference between the WM4 targets and the measured actuals, a few tenths make a lot of different here, I'd like to get the actuals documented.

So time permitting I will be looking at documenting the traffic between the WM and Eltek, there's a fair amount of data available already detailing the Eltek canbus, especially by Remmie on endlesshpere.

I'll ignore the fact we shouldn't be needing to do this.

Another day, another question - why no ticking Rx counter 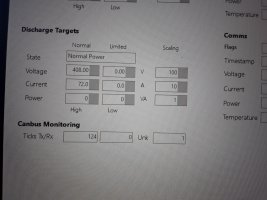 The Rx counter is working here ... there is data coming back from the Eltek and populate the remote telemetrie fields (act volt, act amp, temp )(again WM1) On the life dashboard there is a "charger target amps" and " actual charger amps " field available which are populated with the eltek data...

I'd spotted that the other day, but wasn't overly bothered as the Eltek was receiving, but it's on today's list of things to ponder about.

wim said:
Do some testing with the terminating resistors ... i found they mess up communication.
I now haveonly one on the WM side, ,none on the Eltek side. (they might have one already build in... not sure)
Click to expand...

I did do the basics, briefly, when I started doubting my sanity. I've scoped the traffic and it's clean, and its being captured with no apparent issues, so I know it's there - just pondering why the WM4 isnt seeing it, but appears to be using it.

Same lack of Rx, no reliable control of remote device - but oddly some unknown ticks.

I might see if there's any official support forthcoming tomorrow, for now I'm not going to waste any additional time on this BMS, as I've got a pair of the RECs in the queue.

If anyone else has a WM4 working with a remote canbus device, let me know. 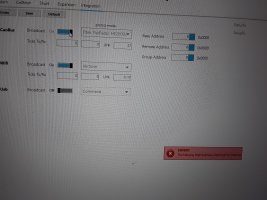 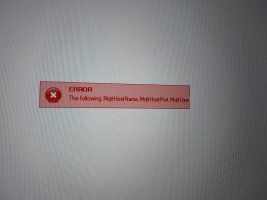 I have a WM4 with three flatpacks running, but I also had big problems in the beginning, nothing I did could solve the mystery with the canbus, but in the end it was a simple fix: I just pushed the buttons once on the WM4 and it instantly started to send and recieve canbus messages.

Filip said:
I have a WM4 with three flatpacks running, but I also had big problems in the beginning, nothing I did could solve the mystery with the canbus, but in the end it was a simple fix: I just pushed the buttons once on the WM4 and it instantly started to send and recieve canbus messages.
Click to expand...

I did read your post initially when I was pondering, and dismissed it only because one button I beleive, is mode, the other is prog - in my view, neither of which should need to be used to "wake up" the bus, unless this is an odd undocumented feature you've discovered.

I tried it anyway, but no change.

Does yours reboot correctly, regaining correct control of the remote ?

I'm assuming you are setting the target current as /3 of what you want ? - so 20 amps target give 60actual, or maybe you've worked out how to address them individually (which I doubt is possible)
F

When I had the problems the WM4 was so new that there where no documentation at all, so I knew nothing what the buttons were for, maybe there is some info about what the buttons are for now? If they are mode and prog, if you are in wrong mode, the canbus is off? I dont know, Im just guessing...

Yes, I set the target current to a third, I have three phases in my house so to even the load on the phases I use three Flatpacks.

I'd be interested in how you are utilising the Elteks. Also, are you happy to leave them running unattended relying on your settings to reduce current based on your set limits ?

I've just spent another hour factory resetting, another fresh install etc etc, and I now have some control over voltage and current - it's sat here at 15 amps 49.6v.

But, powering cycling the Eltek, doesn't retain its settings, so it ramps back up to 53.7v and 30A + - it does only after you've changed the remote targets.

Also, twice, whilst sat stable at the required settings it decided to revert back to its defaults, as above - hence my question, are you happily leaving it unattended ?

I'm not quite at the stage of fixing them with hammers, but they are edging their way to the shelf where my betamax and laserdisc players are sat.
F

Im using the Flatpacks to charge my battery bank when Im exporting solar power, this is controlled by a smart meter and a raspberry with some nodered "coding", I have relays controlled by the raspberry so each time my thresholds passes the relay switches, Im doing this on the primary side of the Flatpacks so each time the Flatpack turns on the WM4 has to communicate with the Flatpacks. It works with no issues, only thing I have noticed is that if I set the current below 0,5A the Flatpacks take approx 5 seconds to ramp down from about 5-7amps, that is probably because they have "charged up" the capacitors, Its not a problem for me bacause I charge with higher current.

Thanks Filip, well given the hassle I'm having with this BMS here and the trolling I'm getting from a mod via PM I think I'll park this BMS for a few months.
F

Sean, I got curious today and rebooted my system to see if the canbus restarted as it should, I have never rebooted the system since I got it working (since may if I remember correct) and as a complete surprise, the canbus failed, sometimes instantly, sometimes within three minutes.
I had big troubles to get it to work again but here is how I did it this time:
Disconnect wifi,
Set your charge targets using usb connection, disconnect usb from computer,
Reboot system using one push on "Prog" button,
Power up the Flatpack right after the prog button push
Let the WM4 and the Flatpack talk to each other without interference for at least 10 minutes,
Connect USB again, and Voila, canbus works again!

Hope this helps for you too, I think the communication between the computer and WM4 interferes the canbus when it is initializing.

The main issue with the Eltek not seeing any bus traffic is that it defaults, so very high current output, until it gets told what do.

That's not healthy for the battery.
F

If you charge the battery to 54V with another device then no current will be released from the Eltek if the canbus fails, I use that method as fail safe when testing.

What version of Powersuite are you using Filip ? 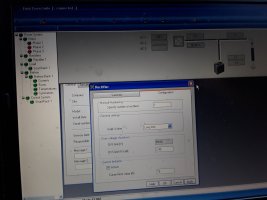