Announcement - Help us fight the BOTS! Please report all spam including stuff in your inbox!
A

In order to keep a PV system safe from external electrical disturbances, chief among them very abrupt propagated surges from nearby lightning strikes, PV panels at minimum must have their frames grounded. The 600V or so that you see specified on some panels is the measure of isolation between the frame and its silicon cells. If that isolation ever breaks over, I would assume your charge controller is toast.

Commercially, DIN rail surge supressors are available very inexpensively, but they break at 380V or so. For protecting panels producing below 100V, I prefer a lower break-over voltage, since even though a 380V spike coming into your charge controller probably won't start a fire, it could kill the controller. I have some of these on order, but may see what I can do to lower their break point:
https://www.aliexpress.com/store/pr...nti-lightning-voltage/618319_32789787385.html

Desktop computer power supplies contain many components that can be used to provide an even easier path to ground for a surge than overcoming that 600V PV panel barrier, and they already come in a conductive metal faraday cage. Some changes need to be made, though, because sub-100V DC is different territory from over-200V AC.


Actually, our job is a little easier since we can put large capacitances to ground to provide a very low impedance path to ground for a strike. AC allows for only small capacitances and inductances because if these are too large too much energy is either bled off to ground or reflected back to the source. Also, even though lightning strikes have a lot of energy, they are short duration: we don't have to worry about blocking or interrupting the enormous amount of power consumed when the AC power distribution grid is accidentally shorted.​
Edit 170225: It has been argued that because lightning surges have rise-times in nanoseconds, back-to-back diode protection is useless. But I think distance to source slows the surges down, and diodes are not expensive 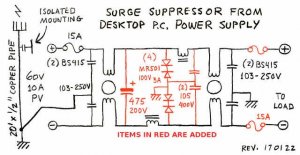 The first image below shows 1N914 back to back diodes (red trace), compared to an ADM5-C DIN rail-mounted surge suppressor (broad gray trace) responding to a 500V pulse for reference. Rise time and clipping level are better than the ADM5-C, but power handling is negligible and clipping is still too high to protect a 100V input charge controller. The second image shows the response of MR501 100V 3A rectifiers. Note time scale of responses has been widened X10 for detail.​ 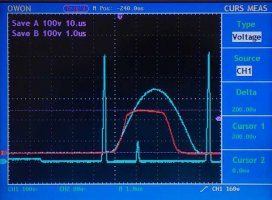 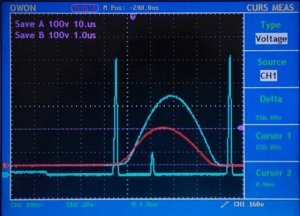 ​
I will be using this modified unit with 2 panels in series for a maximum of 60V and 10A. Although it is good practice in wiring solar panels to use AWG10 or thicker, this is because the voltages are low and the wire length is long. Inside our equipment, because the wire lengths are short, we mainly have to make sure the wire has adequate ampacity. AWG14 is adequate.​ 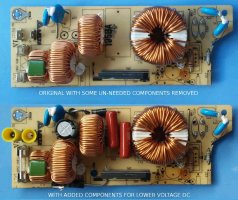 Not shown in the image are the 2 MOV current limiters in parallel at NTC2, that would only have degraded the efficiency of solar panel output, which is intrinsically limited anyway.