Announcement - Help us fight the BOTS! Please report all spam including stuff in your inbox!
R

I am excited to say that I finally got delivery of my first Jayco RV. One of my top priorities is solar power. I will be investing heavily in a solar system. My first task is the biggest: Build a battery bank from 18650 batteries.

Now, some of you may think I'm crazy, but I actually am looking for 600-800ah to power the window ac which runs at 5.5 amps an hour. I was inspired by YouTuber HBPowerwall and his massive battery banks. His videos showed that I'm not crazy and it is indeed possible.

The main challenges I have are:

3. Speaking of bms, what would best suit my needs? I'm doing a 4S but what about P?

I look forward to learning from all of you. Thank you for inviting me here.
F

Hi there and welcome to you RV4LC!

BMS question could come after come other stuff like: what's your average and peak amp (5.5 or maybe more?) usage; how many amps do you estimate for charging the battery; and maybe some other questions, too!
R 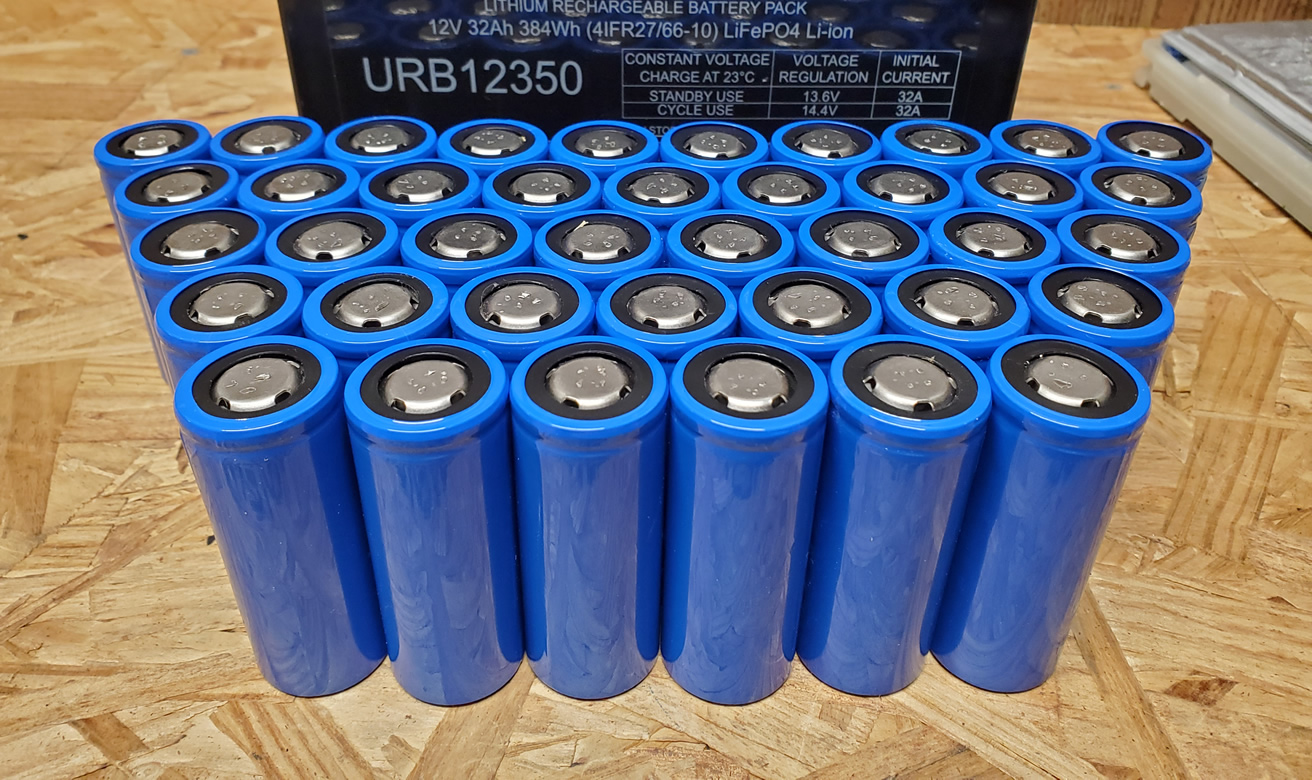 Answers to common questions to help get started faster

Welcome Fellow Ontarian! Norther westerner here. For your Powerwall I would look at larger capacity packs like used Vehicle packs. Depending on where you are you may have access to local supplier of recycled cells. there are auction sites to find old cars and Packs
******Hi My name is Jason and I have SOCD (Solar Obsessive Compulsive Disorder)*******
Current Powerwall - 1400 Cells 7s200p (modular 40p packs) ~ 12kWh of storage 4x 315W Canadian Solar Panels

I am excited to say that I finally got delivery of my first Jayco RV. One of my top priorities is solar power. I will be investing heavily in a solar system. My first task is the biggest: Build a battery bank from 18650 batteries.

Now, some of you may think I'm crazy, but I actually am looking for 600-800ah to power the window ac which runs at 5.5 amps an hour. I was inspired by YouTuber HBPowerwall and his massive battery banks. His videos showed that I'm not crazy and it is indeed possible.

The main challenges I have are:

3. Speaking of bms, what would best suit my needs? I'm doing a 4S but what about P?

I look forward to learning from all of you. Thank you for inviting me here.
Click to expand...

I am just across the boarder from you in northern MN. I have been experimenting building batteries for my small off grid home but have also been thinking about a system for a future tiny house on wheels.

I would highly suggest building a 24vdc or 48vdc battery for the range reasons mentioned by others and for better efficiency with inverters and appliances. Personally I think 24vdc is the sweet spot for mobile situations like an RV because many loads will work on it and it is easy and fairly cheap to get a 24vdc to 12vdc converter for any built in things that need that low voltage.

I agree with what folks have shared above that you should at least consider larger sized cells and/or LifePO4. LifePo4 is safer but less energy dense it also would work better for a 12vdc system if you stay with that.

BMS get wired to read each group of parallel cells so you could get away with as little as one of them for your whole pack. You would also want to fuse each cell in the parallel packs to protect against individual cells failing. You can get cheap BMS many places DALY is the brand I went with. I would also encourage you to check out DIY BMS as a more robust but affordable option. https://github.com/stuartpittaway/diyBMSv4

My planed design is packs with 100 cells in parallel 5x20. Then I put 7 of those packs in series for a 24vdc system (25.2vdc nominal). Then add more of these blocks in parallel until I have the desired capacity. Each block would be able to handle 100-200 amps draw depending on what guage of wire I use for the busbars and so 1-2 blocks would be enough for the 6kw inverter I plan to use. Right now I am mostly sourcing standard laptop+ cells so I will build the packs out of 2000-2200 mah average cells. So a whole block would conservatively have 200ah at 25.2vdc for about 5kwh of capacity per block. Of course if you use high capacity cells like the 3000mah ones that you can find in ring modems or moped packs found on Battery Clearing House you get about 50% more for the same space.

You would probably want two blocks or more depending on what you want to power and for how long. Of course you also have to produce that power as well so how big a solar system you can fit on/in front of the rv?
R

Hi everyone, thanks for the replies. I have commenced my diy build for a 90ah 12 volt battery pack as a starter battery.

The first photo shows a 3s22p setup.
The second and third photo is me playing it safe and practising with tape prior to using nickel strips on a practice 3s4p setup.

Can anyone comment on the simple practice build of my 3s4p? 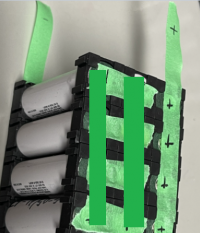 The issue is fusing the individual cells for safety.
I would recommend cell level fuse sheets from Battery hookup.

Also for "12V you really need to go with 4s as 3s will barely work for a 12V system. Cells will not maintain 4.0V for very long especially with a high draw.
Also you may want to start a new thread as this thread is for Introductions.

Wolf
For Info Google Drive
Not your average Wolf

I didn't read all the previous notes, but just jumping in real quick. I can't tell if these cells are new cells, or reclaimed from other devices. The odd different colored cell is kind of throwing.
If these are new cells, you're doing pretty good overall.
If these are reclaimed cells and you don't know their original usage or demand (such as if these were medical packs rarely if ever used, they could be considered almost new with minimal degradation. or they could be electric bike or other abusively cycled cells in which case they had a hard life) then it is highly recommended that they be fused. If not 'every' cell fused, small batches. 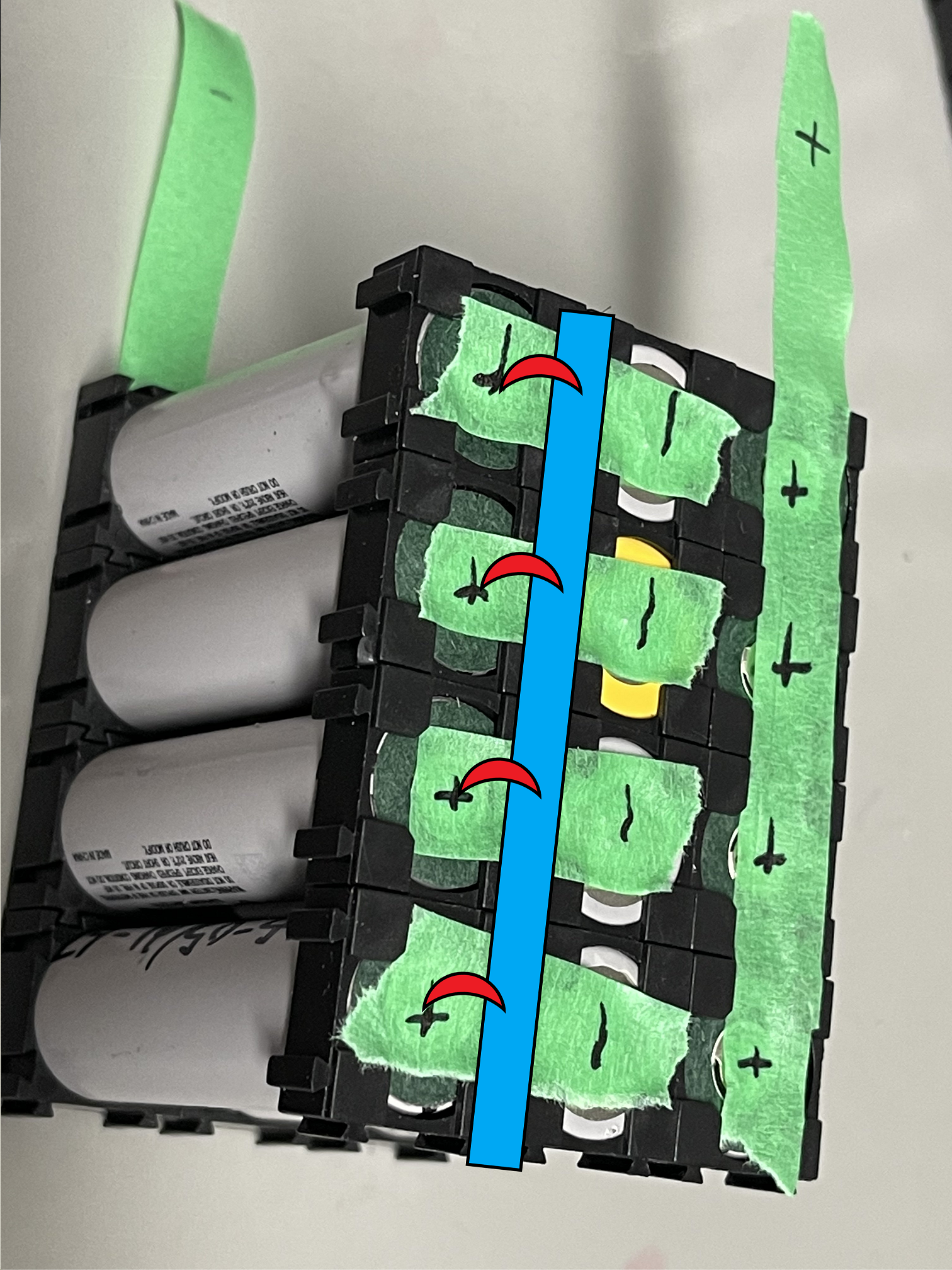 I agree with Wolf that you need to bridge all the parallel cells together on "both" ends to make them truly parallel.
In the image above is one option for fusing and parallelizing. The red "moon" shaped segments would be fuses, they connect to common buss which then connects to the other cells. This buss I drew between the cells, but it could just as easily be connected directly to the cells (similar to how you have the + green tape line). You need to have a fuse between all 3 sets of cells to the common buss.

If these are new cells or very little used (like medpack cells) then you could generally get away with not using fuses at the cell level in small packs like this. On larger packs, like 70p or larger for instance, it would be a good idea to fuse at least segments of parallels. For instance, each 10p of a 70p pack would be fused before connecting to a common buss for a parallel cells.
Proceed with caution. Knowledge is Power! Literally!
Knowledge is Power; Absolute Knowledge is Absolutely Shocking!
Sub-Certified 18650 Cell Reclamation Technician