I have a report from a user that said that after applying it to all 96 electrical connections, "The Gen1 Nissan Leaf cars that I used it on, the owners told me that they have around 40 - 45 km more range"

The 2011/2012 Leaf pack usually suffers from high internal resistance (Hx), but this is clearly too god to be true. But is there any truth at all to this product when used on busbars?

EXPENSIVE!! Looks like a super cleaner of some sort. By the description on the link above, it almost sounds like snake oil

Stabilant 22 is an organic compound that allows electricity to flow where it should and should not. It starts to decompose at around 240C.

This element behaves as a conductor or insulator depending on various factors, for example the electric or magnetic field, pressure, radiation that affects it or room temperature
Click to expand...

Sounds fishy to me. The vids I found on it seems to be sponsored by it, or others just making claims and not showing before/after results. So can't say for sure. Then again, I only did a quick search right now.

I have to agree - I mean even on the images on their website they are applying the liquid to the TOP of an IC... like, what possible use could that have? The best it could be is effectively a really good dielectric grease. And with what we are doing - rigid clamping should be more than enough. I'd think the small gauge of our bussbars is more likely to cause an issue than the connectors between packs.

Yeah I want to believe, but would like to see some independent testing. 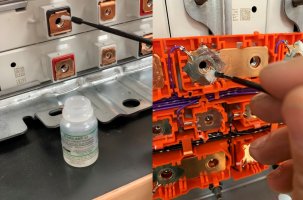 If the connections have been made properly from start it wont do any good. The only good it can do is that you picked it apart and cleaned the ends. Because just applying something wont help.
NOTE! My links supplied in this message may be affiliated with Ebayand by clicking on them you agree on the terms.
YouTube/Forum system setup/ My webpage Diy Tech & Repairs

Stabilant 22 (and 22a) is a brilliant product for dealing with corrosion between connector terminals. Typical uses are in automotive EFI wiring harness to sensor/injector/actuator connections, particularly where a little extra variable resistance can wreak havoc with the data the ECU is receiving. The resistance is typically variable as the connector is in a fairly extreme and variable environment. i.e. lots of vibration, temperature fluctuations, humidity fluctuations etc. Add a little corrosion into the mix and the electrical properties of the connection begin to resemble mud.

S22 is almost like a cross between WD40 and di-electric grease. Penetrate, corrosion resistance, and friendly electrical properties.

It has a big following with owners of early EFIrunning Bosch systems where the manufacturer opted for the cheapest possible components. Think Ferrari 348, 355... These cars generally had engines tuned to extract as much power as possible from the engine, so the margin of error that is acceptable in sensor readings is less than that in less stressed engines.

A 355 that is throwing all sorts of ECU codes, running like a pig, showing intermittent misfires and other oddities can be transformed in a matter of 15 minutes by disconnecting all ECU connectors, cleaning away traces of visible corrosion,applying a drop of S22 and re-plugging everything.

The 'long term' fix in these cars is to replace the entire wiring harness with one made of better quality cable, gold plated connectors and proper heat protection. S22 is the cheapest way to 'prove' that this is needed.

Yes - Ferrari chose to make their cars out of the cheapest junk available, while Mercedes Benz of the same era used much better quality components.

Having said all that, S22 is only going to help where there is a connection with actual corrosion, even if it is not visible. It is also only a temporary fix as it eventually will get displaced and corrosion will resume. Di-electric grease is much better at preventing corrosion in the first place. Of course, best of all is to not have a connection or to seal the whole thing in a big blob of epoxy.

In summary, S22 is a really useful diagnostic tool, but not much of a long term solution.

I should also mention - S22 is available from VW dealers here in the USA. Find an online VW parts store attached to a dealership and you'll get the best prices.