understanding I R what is good and what is bad

A user here called Wolf is our god in terms of data collection on cells, he has some cells in his IR cheat sheet on google drive: https://drive.google.com/drive/folders/1UOQUXa4Kwa99KoeuNDe7EV3iSECb8iIs
C

robbymax said:
just bought a RC3563 and i have tested a single cell and a 12 volt lithium battery and got readings but where is the info to tell me what is good and what is bad
Click to expand...

You can also look at the datasheets for whatever cell you are testing and there will usually be average and maximum IR levels indicated. I am lazy so I just reject everything over 80ACIR and accept that some of mine in the 60-79 range are probably more degraded than ideal depending on brand/chemistry/age... I got to that 80 number by scanning Wolf's charts and seeing that most cells are okay up to around 70 and almost all are bad over 80.
H

In a thesis manuscript, I read that a cell having IR 3 times bigger than nominal (indicated on cell datasheet) has to be rejected. Something else it that use pack of cells with roughly the same IR is cautious when building packs.

Harry974 said:
In a thesis manuscript, I read that a cell having IR 3 times bigger than nominal (indicated on cell datasheet) has to be rejected.
Click to expand...

Yes, but thesis are often based on theory and not much experience. I prefer having both theoretical and practical information and then start doing my tests. What I found is this. I have quite a few Samsung 22F cells. The datasheet says this about IR:

Which isn't too valuable as an information... The student who wrote the thesis could suppose that 3x100mOhm (or 3x75mOhm) would be a higher limit for IR. But actually what @cak says makes more sense. What I measured on my second hand 80-90% SOC cells is this: 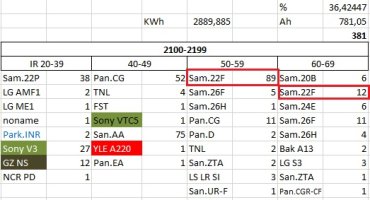 Plus, what I noticed while processing cells is that the older ICR chemistry cells had a higher IR, between 80 and 100mOhm. The really old cells went above 100mOhm (up to a maximum of 110mOhm). And these high-IR cells seem to degrade in capacity a lot faster that the others; I measured that by doing many C-D-C cycles and letting cells rest between each cycle.

So, the datasheet says that IR for Samsung 22F new cells should be <=100mOhm. My conclusion if that 50-59mOhm is a nice value for second hand Samsung 22F cells (quite a few measure 50-51-52mOhm) and 60-69mOhm is acceptable. And, just like @cak I won't use cells above 80mOhm in the powerwall. I will use them for non-critical applications (my bike lights, battery backup devices, my ATTiny IoT boards and so on).


Harry974 said:
Something else it that use pack of cells with roughly the same IR is cautious when building packs.
Click to expand...

Yes, I think everybody has a rough idea of an acceptable range for both IR and capacity, when mixing cells in a pack. My range will be about 400mAh for capacity and 30mOhm for IR.

I understand that OPUS IR measurements are 'junk'. In the early years I didn't pay attention and suffered a few bad packs. Thanks to @Wolf's work and discussions, I pay attention now but go with consistency/gross-limits based on my OPUSs.

The result is that my packs are functional but not nearly as precise in voltage as @Wolfs. Operationally, for long life purposes, my battery will never be charged above 4.0v*14 = 56v so the fact that a few packs are 4.04v/cell and a few are 3.96v/cell at max divergence is OK.

Also the battery design/size results in low stress. I'm running <200ma/cell average charge/discharge and with additional packs in the works, will reach as low as 100ma/cell.

The low stress and middle-voltage-range operations mitigate pack variations for me - but I believe my looseness on IR is contributing to the variation in packs during the charge/discharge curve and blocks me operating above 4.1v/cell.

LifePo4 is a different animal and one of the issues is the 'lack of voltage range' to work with - e.g. I wonder how IR affects this as one would not have the options to operate in the 'middle voltage range' so much as I'm doing with 18650 to mitigate things.
Last edited: Mar 24, 2022
H

Oberfail said:
A user here called Wolf is our god in terms of data collection on cells, he has some cells in his IR cheat sheet on google drive: https://drive.google.com/drive/folders/1UOQUXa4Kwa99KoeuNDe7EV3iSECb8iIs
Click to expand...