Yet Another CPAP Backup Battery

I see a couple of people have created CPAP battery packs. I created a 4s20P pack for my previous machine that had a 12V requirement (I used a buck converter on the output). Funnily enough, it wasn't long after finishing (kind of) that pack that I upgraded by cpap to a new model which prefers 24V. It's a Resmed, and I am aware their smart connector can manager the voltage issue, but I have some changes I want to make anyway, so I am probably going to break down the battery and re-build. For one thing, it appears I drastically over-built this battery ... I might be able to get away with half the capacity, though I probably won't cut back that much. Instead I will re-optimize the pack based on the cells I have (all recovered from laptop batteries). I have more cells now (currently unused) and can probably achieve a much more balanced (capacity-wise) pack than before.

What I would LIKE to end up with is a unit I can leave 'on line' all the time ... an always on battery backup of sorts. When AC is available, the battery will be charged/maintained, and when AC is gone, it will switch over to discharge automatically.

I have read that some BMS units will overcharge a battery if left too long with power on, is that correct?

I could change directions and switch from a BMS to an external balancing charger, but I don't believe they will maintain a battery pack at all once shut down, and I like the BMS being their for discharge protection too.

Any thoughts? I've read through two similar threads, but they were both geared towards camping, which is a different use case.

For those wondering, I actually do NOT lose power that often ... as little as 0 and as much as 5 times a year, but I had to come up with something fun to do with the batteries!
G

khauser said:
[...] What I would LIKE to end up with is a unit I can leave 'on line' all the time ... an always on battery backup of sorts. When AC is available, the battery will be charged/maintained, and when AC is gone, it will switch over to discharge automatically.

I have read that some BMS units will overcharge a battery if left too long with power on, is that correct? [...]

Unlike lead acid, if a Li-ionbatterypack is maintained(almost) fully charged in standby mostof the time then the pack will degrade very quickly, even as much as 10 timesfaster vs.optimal management - e.g. possibly under a years life vs a decade or more. For example, such rapid degradation occurred inmanylaptop packs in the old days before"battery saver" firmware existed (e.g there were were manycomplaints in Dell's forums that laptop packs died in a year or less - due to being maintained at around 100% SOC in a hot laptop).Extreme voltages(SOC) and temperatures are the primary culprits behind accelerated degradation of Li-ion batteries.

But this is easy to workaround. Namely, if your pack has large enough capacity that half of itsuffices for yourneeds on battery runtimethen you can greatly extend batterylifetime by charging it only to50% capacity on standby.You could do that simply by buck/boosting a power supplyto the 50% SOC resting voltage, then using a timer to turn the power supply ononce a week or so for sufficient timeto top the pack up to 50% SOC (theself-discharge rate will depend on the battery health as well as the BMS quiescentcurrent). Also you mayneed to balance it once in a blue moon.The pack should last well over a decade when intelligently maintained thisway (that's how NASA prolongs the life of their Li-ion batteries todecades for theirdeep space missions).

Basically you'd want an ats for the batteries. Then just enough smarts that would auto charge them when they drop to a certain amount. This would get around the "always on charge" problem. You could do this with simple electronics, or you could go the microcontroller route. Both options would be just about as the same in difficulty, I would guess.
Proceed with caution. Knowledge is Power! Literally!
Knowledge is Power; Absolute Knowledge is Absolutely Shocking!
Sub-Certified 18650 Cell Reclamation Technician

Thank you both! I'll have to check, I don't think I have capacity to hold at 50% and last a night, but I might be able to get there at maybe 70%.

Korishan, your answer is obvious enough I am kicking myself for not thinking of it! I had let myself over-complicate the issue. And yeah, it would be easy enough to do with or without a microcontroller, but now you have me thinking what else I could do if I used a microcontroller, LOL! As long as I select a unit with low sleep current draw it would be negligible, and it really doesn't need to be awake long or that often.

Thanks for the ideas!
G

Yes, if you have the requisite electronics skills then you can obviously implement muchbetter control of the charge termination voltage.

There is a lot of literature with data on the (immense) lifetime gains from charging/storing to lower voltages. They show that even modest lowering of charge termination voltages can lead to great gains (due to the exponential dependence of degradation process on high SOC and temp).

There Ecker et al. write: "During calendar aging tests cells were stored at different SOC and temperatures. Fig. 6 shows capacity fade and resistance increase for cells stored at 50C at different SOC. As expected, cells stored at lower SOC exhibit a longer lifetime. Especially cells stored at 100% SOC show a much faster degradation compared to other SOC. These cells only reach a lifetime of 107 days at 50C until capacity reaches 80% of the initial value (linear interpolation). At this time the resistance increased by a factor of 1.3. For comparison, cells stored at 95% SOC reach 288 days until end of life (linear interpolation), whereas a cell stored at 0% SOC has an extrapolated lifetime of about 4 years (linear extrapolation of the last three measured data points)" 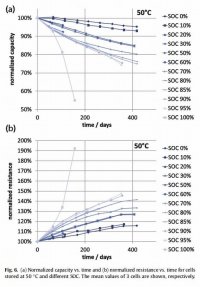 Not sure if the protocol here is to start a new thread for this, but I'll try in here first. Anyone have suggestions on sourcing parts, particularly BMS's? Research suggests that many available BMSs ... suck. (That could be literal if they are draining the pack, LOL).

But I am not finding a whole lot of reviews, testing, etc, so its hard to know what one is getting.

I am aware that the term "BMS" is overused, and I know that I have to be sure the unit is meant to do all of the things I need, but how do we know if a unit is quality??