I was able to get several APC Smart-UPS 1500 with dead batteries and as they were older units, they were going to be disposed of.
I offered my services to accomplish this task.
After a bit of research I came to the conclusion that an7s16p Battery would fit very nicely. 112 cells, my o my where would I find those?
I had a bunch of very good LGGBM261865 cells left over from a batch of 1600 that I didn't use in my 2nd 14s80p Battery.
At 2600mAh or so per cell I would come up with a 41.6Ah Battery. Considering the RBC7 original pb battery had 18Ah I would hopefully double the runtime.
The design was to build an 8X14 matrix which would fold in half with spot welded cell level nickel fuse strips.
View attachment 23147
Being a true believer in using my excel repacker I entered the surplus of cells into it and came up with my cell allocation.
View attachment 23156
Not bad results 41.9Ah. Distributed according to the repacker.

Between the folded halfs besides vast amounts of Kapton tape, a sheet of Fibroid Fish Paper seemed appropriate. Also some paper on the top. The folding of a 4s cell level fuse strip was interesting but successful. Not for the faint of heart

producing a Borg like cube. Unfortunately I do not have pictures of this as I did it in the shed away from the house. Safety first! Before folding the 'cube" I soldered 2 #6 solid wire bus bars (after a quick spin in the drill to straighten) to the nickel sheets bent accordingly and capped with crimped and soldered #6 1/4" lugs.

With more copious amounts of Kapton tape to hold the whole apparition together and finalizing the connections with 3 bus bars across the top the whole thing was now alive. 29.2V at the terminals. Balance wire positions were carefully located and attached. I was half expecting the thing to start trans-warping into space announcing "Resistance is futile. You will be assimilated"
Time to do a capacity test. No need to charge the cells at this time as they were all still OK from the initial test.
Whoa nice results! Maximum discharge was 10A on the SkyRC BD250 (Limited to 250W) 40.5 Ah right in line with my repacker.
View attachment 23154

Time to do some labeling and wrap this cube up before it becomes Unimatrix 01
Added the Daly BMS. Heat Shrink bolt and nut connectors and give it a final Kapton containment wrap.
It is not the prettiest battery I have ever built but the only one that can see it in the UPS is me. 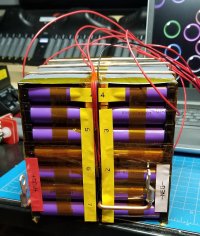 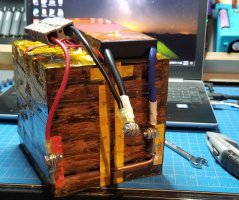 Fits quite nicely into the UPS battery cavity. 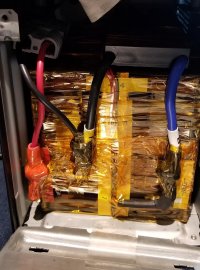 Plugged the battery in. Plugged the UPS in self test passed No explosion , No Fire. Bonus! 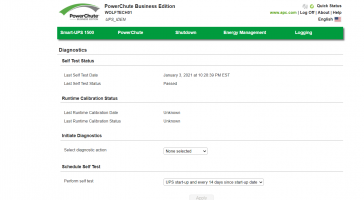 Runtime calibration initiated this morning but I expect it to be up there. 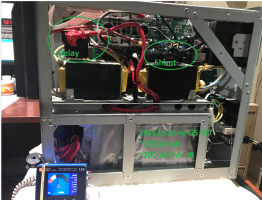 I use these to smooth the twice daily ATS switchovers of my off-grid system.